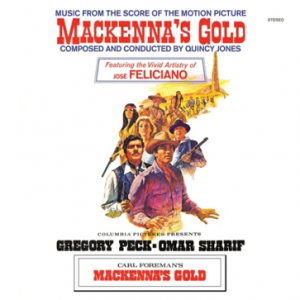 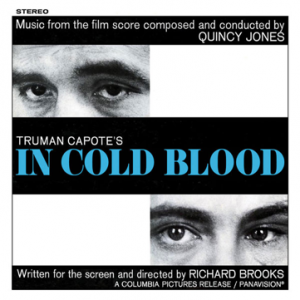 A very welcome entry in the Silver Age soundtrack discography is introduced by Intrada label. Two of the most successful Quincy Jones scores of the 60s, MACKENNA’S GOLD (1969) and IN COLD BLOOD (1967) released as a double bill in one cd, closing a gap in the composer’s soundtrack discography on cd (at least regarding the US official releases).

Regarding the scores, both are favorites and include some of the best music Jones composed for the movies. MACKENNA’S GOLD – a decent western directed by J.Lee Thomson with Omar Sharif and Gregory Peck in the leading roles – contained a very appropriate song performed by Jose Feliciano which was the jewel of the album and the musical centerpiece of the film. Feliciano gave a fantastic performance during the first minutes of the film which unfortunately was left out of the studio album that was released by RCA. The album contained two specially made performances that lacked the movie performance’s roughness and originality. Anyway this was a very finely made LP that was nominated for a Grammy in 1970 in the best original score category. As for IN COLD BLOOD, what can I say for this movie and score that hasn’t been written or said. Jones’ first academy award nomination for best score, in the year of his other landmark, IN THE HEAT OF THE NIGHT (1967-dir.Norman Jewison), the score was a nightmarish, brilliant blend of jazz ensemble and string orchestra, a small score that supported Richard Brooks’ unsurpassed movie in an ideal way, highlighting the characters’ personalities, motivations and emotions in a way that few film composers had achieved at this time. A great album was released by the short-lived Colgems company – that was infamous for its great quality pressings – that quickly became a collectible item.

Tsunami label from Germany released the first cd pressing of MACKENNA’S GOLD in 1994 containing the original LP program, while IN COLD BLOOD LP program appeared for the first time on cd in the last years (2016) excellent Universal France box set THE CINEMA OF QUINCY JONES.
We owe Intrada one more bow for this wonderful special treatment of two very important pieces of soundtrack history.